What is a Central Serous Retinopathy? 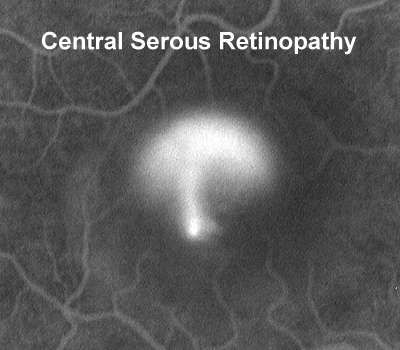 Cause of Central Serous Retinopathy

The animated image shows a classic smokestack on fluorescein angiography in a patient with acute central serous retinopathy. The white trace dye, fluorescein, does not leak out of the pigment epithelium under the retina. In patients with central serous retinopathy, there is leakage in the choroid of fluid that builds up and then pushes through the barrier layer under the retina, the retina pigment epithelium. That shows up as a leaky spot on the fluorescein angiogram. Because of the concentration gradient in the subretinal fluid, the fluorescein dye moves up from the leaky spot and forms a smokestack looking white are under the center of the macula.

There are several tests that can be done to establish the diagnosis of central serous retinopathy and to help guide management. Fundus autofluorescence - in the accompanying photograph, show the area of bright autofluorescence from the serous retinal detachment. The photoreceptor outer segments that accumulate in the serous retinal detachment autofluoresce and show up bright in the image. Also optical coherence tomography can show the choroidal thickening and the subretinal fluid. Fluorescein angiography and indocyaning green angiography will show which areas of the choroid are leaking and can help guide treatment. 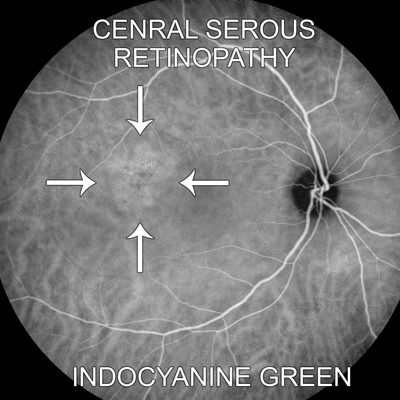 Central serous retinopathy is associated with Type A personality. Ninety percent of cases occur in men. It is also sometimes seen in people taking steroids orally or by nasal spray. It can also be associated with pregnancy. Serous retinal detachments like those seen in central serous retinopathy can also seen in patients with severe high blood pressure, age related macular degeneration, and posterior uveitis.

Visual acuity usually returns to normal within about 6 months (sometimes sooner) in 95 percent of affected patients. The recurrence rate is 25 percent. If vision does not recover in a reasonably amount of time, hot laser, photodynamic therapy (cold laser) can be considered.

What is Chronic Central Serous Retinopathy

Very few patients with central serous retinopathy require treatment. 90% of patients improve without therapy. Sometimes, central serous retinopathy becomes chronic and causes vision loss that does not improve. Focal laser treatment to the leaking spot is usually effective in patients with CSR. More commonly, photodynamic laser with visudyne is used to treat CSR. Photodynamic laser is a very low power laser which is used to activate the visudyne. The visudyne is infused intravenously over 10 minutes then a 5 minute washout period is observed. Then 86 seconds of laser (low enegery) is used to activate the the drug and seal up the leaky areas in the choroid. This treatment is usually effective. It is likely safer than focal laser but does sometimes need to be repeated.