What is a Choroidal Melanoma? 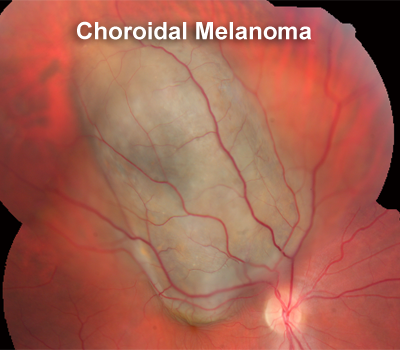 Choroidal Melanoma is rare - with an incidence of about 6 cases per million people per year in the United States. Although choroidal melanoma can occur in children, it most often presents in patients over age 45 with an average age of presentation 55. 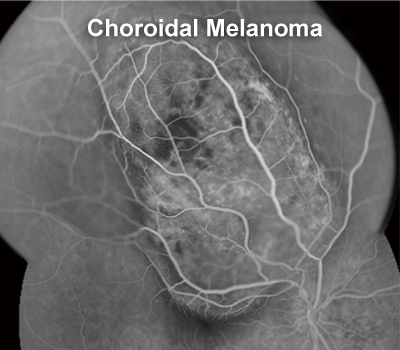 Choroidal melanoma rarely metastasize to the lungs, liver, and elsewhere.  Any history of recent respiratory problems, jaundice, weight loss, or other significant health problems raise the worrisome possibility of metastasis from the choroidal melanoma.

Melanoma in the eye is usually only visible using special examination tools (slit lamp biomicroscopy and indirect ophthalmoscopy).  Rarely - like on the photo above--a melanoma is big enough to see through a dilated pupil, causes brown spots on the outside of the eye, and is accompanied by a dilated superficial vessel on the eye (a sentinel vessel) that feeds the melanoma.

Most eyes with melanoma have fundus photography, fluorescein angiography, and ophthalmic ultrasound a-scan and b-scan.  (see right)  Fundus photography is helpful in looking for change in lesion size over time.  Ultrasound gives the size as well as the internal characteristics of the lesion.  The ultrasound is useful in differentiating melanoma from choroidal hemangioma and metastatic choroidal tumors.  Fluorescein angiography is helpful in looking at the circulation inside the tumors, but is most useful in ruling out choroidal hemorrhage which looks black on angiography.

Evaluation by oncologist, medical doctor, ophthalmologist:  Systemic evaluation including a careful history, physical and laboratory testing is necessary to rule out metastatic spread.  Liver function tests and sometimes imaging of the liver is ordered.  Also a chest x-ray and sometimes a chest CT scan are checked.  Other testing can be done depending on the signs and symptoms of the individual patient. 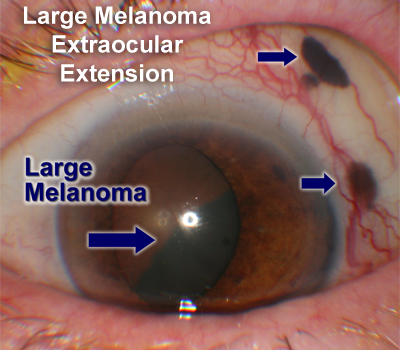 If a small or medium melanoma is not near the optic nerve or the macula, treatment often preserves central vision. If a melanoma is near the macula (central vision) or near the optic nerve, the radiation from plaque therapy or external beam therapy, or scarring from laser can cause vision loss. Vision loss from radiation retinpathy usually occurs a year or two after the melanoma treatment.

Prognosis for Metastasis and Death 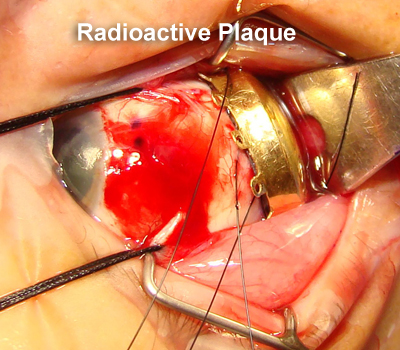 Transpupillar thermo therapy with a diode (810nm) laser can sometimes control tumors less than 3 mm in height.  Laser treatment has not been tested in a large randomized trial like brachytherapy (radiation).  It is sometimes employed for tumors near the central vision or the optic nerve in an attempted to spare those sensitive areas potential damage from radiation.

For small and medium tumors, a plaque, which looks like a fat quarter, can by sown on the eye and left for 3 to 7 days to radiate the tumor.  A large study showed that survival was just a good for patients with medium sized tumors who were treated with plaque radiation therapy as for patients who were treated with enucleation (removal of the eye).  This is usually done as an outpatient procedure.  During the time when the plaque is on the eye, the patients is a little radioactive and has to avoid being around children and pregnant women.

Removing the eye has always been considered definative treatment for choroidal melanoma. For large melanoma and for melanoma in high risk location or in a locaiton where vision cannot be preserved, enucleation is often performed.  The eye is removed surgically and then after 2 months the patient is fitted with a false eye that usually matches the fellow eye.  In most cases, within 2 or 3 months of surgery, the cosmetic result is excellent and the false eye sometimes looks better than the real eye.