Patients with OHS have multifocal retinal scars and are often develop neovascular membranes and vision loss. 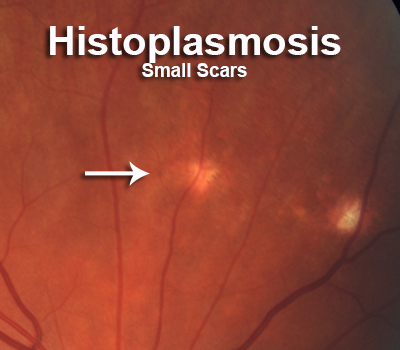 What is ocular histoplasmosis (OHS) 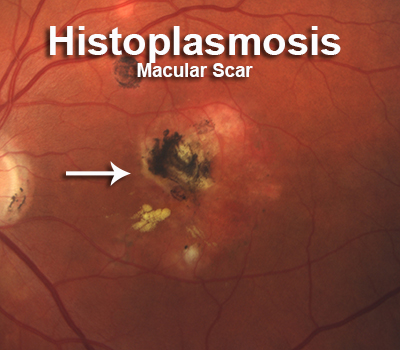 The fungus causes small areas of inflammation and scarring of the retina. These are called “histo spots” and may be found in both eyes. The affect on vision depends on the location of the scars. Scarring in the peripheral area of the retina may have little or no impact on vision, while a central scar affecting the macula may cause a prominent blind spot. The accompanying image shows a macular scar from histoplasmosis and also from an untreated choroidal neovascular membrane. This person has no central vision in the affected eye.

Can it be treated? 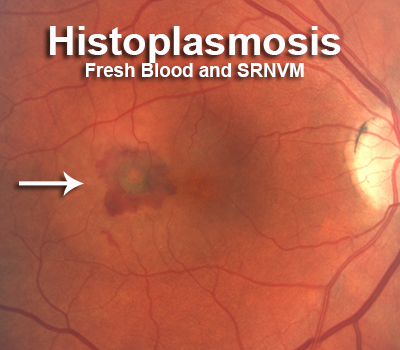 There is no treatment for a macular scar. However, a patient with a fresh choroidal neovascular or subretinal neovascular membrane (SRNVM) can be treated the same way a person with wet age-related macular degeneration can be treated. The photo with this image shows the only seeing eye of a patient with OHS who has recent vision loss from fluid and blood associated with a new SRNVM. This patient responded beautifully to intravitreal Lucentis therapy and regained normal vision.

What is a subretinal neovascular membrane? 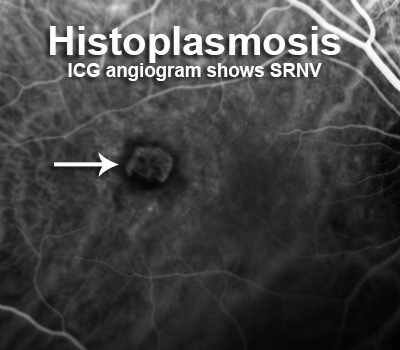 For unknown reasons, sometimes a blood vessel network will grow starting at the edge of an old histoplasmosis scar. When this is close to the center of the vision, it can cause symptoms of distortion and vision loss. When it is directly below the central vision, it can cause central vision loss. The accompanying image is from an indocyanine green angiogram and nicely shows the network of abnormal blood vessels that have grown from the old scar. This patient has had vision loss for about 2 weeks. There was a fresh bleed that probably caused the sudden onset of symptoms. The blood vessel growth, if untreated, usually evolves into a scar and damages the overlying retina causing permanent vision loss. If the blood vessels are treated early, the growth and transformation to a scar can be prevented and vision loss averted.

What is the treatment?

There are several options. At the moment, the best treatment is intravitreal injections of anti-VEGF medications similar to what is done for wet age-related macular degeneration. Other options include laser, both thermal and photodynamic. Subretinal surgery can be done in rare cases where the scar is under the central vision, is fresh, and the patient is young. The patient presented here had intravitreal Lucentis therapy and regained vision within a few months. The spectral domain optical coherence tomography scans show resolution of the subretinal fluid with restoration of normal foveal (central) anatomy.