There are several types of lasers that are used to treat dozens of ophthalmic disorders. This page is an overview of laser for retinal diseases.

What is a Laser? 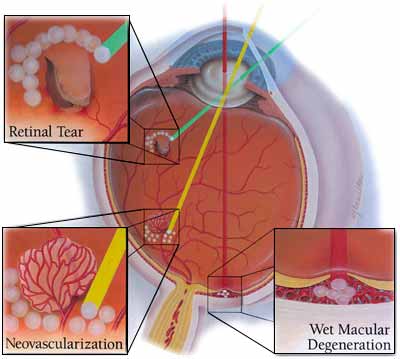 A laser beam is made of light of the same color (wavelength) and the light is synchronized so the beam is very focussed (coherent). The word laser is an acronym standing for Light Amplification by Stimulated Emission of Radiation. Lasers are useful in treating retinal diseases. Anything than can be seen in the eye can be treated with laser. Because of that, some of the earliest lasers were developed for ophthalmology (the Krypton laser). Laser treatments fall into three major categories:

What are the Different Types of Laser? 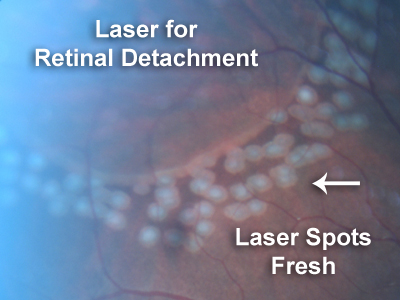 We use green, yellow, and red lasers to treat the retina. These color lasers are all useful for treating leaking blood vessels or tacking down the retina. Green is useful for tacking down the retina. Yellow is useful for sealing leaky blood vessels. Red is useful for treating through blood. Other lasers used in ophthalmology (the eye) but not by retina specialists inlcude YAG laser to open membranes in the eye, excimer laser to shape the cornea, and argon laser for glaucoma. Retina specialists also use photodynamic laser which is a combination laser drug treatment. A drug (visudyne) is injected into an arm vein. Once it reaches the eye, it can be activated with a low energy red laser to seal up abnormal and leaking retinal vessels. It is useful in macular degeneration and also to treat some choroidal tumors and in central serous retinopathy. 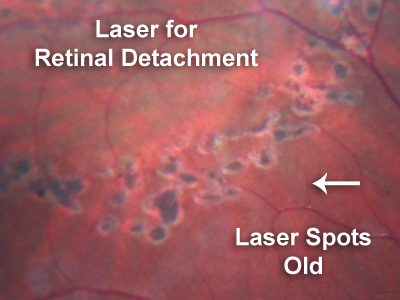 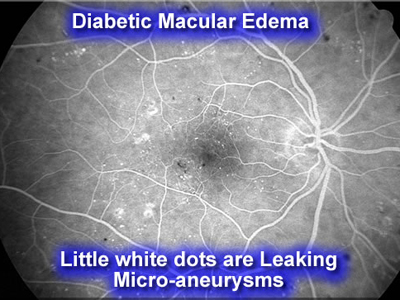 Sometimes patients with diabetes lose vision when leaking blood vessels cause the center of retina to swell. The center of the retina is called the macula, swelling is called edema. Macular edema means swelling of the center of the retina. In cases where there are focal areas of leaking blood vessels from diabetic retinopathy, laser can sometimes reduce the risk of vision loss and improve vision. At the time of this writing (January 2015), injection therapy has been shown to be superior at improving visual acuity in many patients with diabetic macular edema. Because laser provides a longer lasting benefit, many doctors use a combination of injection therapy and laser for diabetic macular edema. 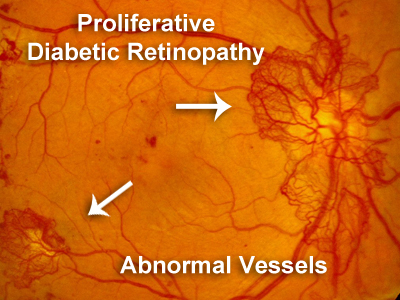 Patients with diabetes, because of poor circulation to the retina, sometimes develop new and abnormal vessel growths in the eye. This is called proliferative diabetic retinopathy. These abnormal vessels cause bleeding, scarring, retinal detachment, and can lead to severe and permanent vision loss. Patients with these vessel growths have Proliferative Diabetic Retinopathy and are treated with heavy laser to the peripheral or side retina. This laser can save the eye and preserve central vision. It sometimes causes a loss of peripheral vision and the pupil size can get a little bigger after this laser.

What is Photodynamic Therapy? 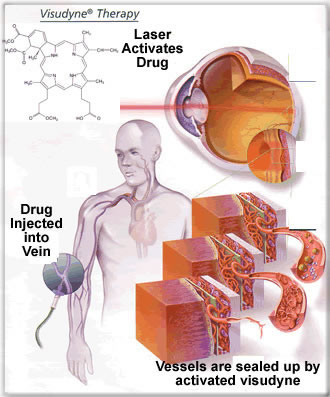 Verteporfin injection in combination with photodynamic therapy was initially developed in 2001 to treat abnormal growth of leaky blood vessels in the eye caused by wet age-related macular degeneration (AMD; an ongoing disease of the eye that causes loss of the ability to see straight ahead and may make it more difficult to read, drive, or perform other daily activities), pathologic myopia (a serious form of nearsightedness that worsens with time), or histoplasmosis (a fungal infection) of the eye. Verteporfin is in a class of medications called photosensitizing agents. When verteporfin is activated by light, it closes up the leaking blood vessels. With the advent of injection therapy for choroidal neovascularization, many physicians now use PDT for central serous retinopathy.